The winner of the Jhalak Prize is to be announced on the evening of 1st May. As is by now traditional, Catriona Troth has been reading all of the shortlist (and most of the long list) and here presents her round-up of this year’s contenders, her personal favourites and her prediction for the winner.

It is always such a pleasure each year to discover what books have been chosen for the Jhalak Prize longlist, and to delve into the ones I have not already read.

So, my run down of the top six, with links to my full reviews on BookMuseUK:

*WINNER: In Our Mad and Furious City by Guy Gunaratne

Guy Gunaratne’s mad and furious city is London – the rough estates of modern, multi-cultural, working class London. A soldier has been murdered on these streets in broad daylight and the city is turning on itself. Far Right groups are marching, threatening the mosque. And in response, the new Imam is summoning up a vigilante group of young men, the Muhajiroun, to protect, but also to police, their community.

A powerful novel that rips a window onto contemporary London in all its multicultural complexity – its violence, its vibrancy and its endurance.

The Perseverance by Raymond Atrobus

Raymond Antrobus’s stunning debut collection has also been shortlisted for the 2019 Griffin Poetry Prize International. Antrobus is Deaf, and as he points out, Deaf culture has too often been silenced, patronised and misrepresented. Antrobus’s cuts through that with shining clarity. This is an exceptionally talented poet at the very start of his career.

So many layers of complexity are woven into this story of two lives colliding (literally) on Waterloo Bridge. In the course of a story that takes place over a mere handful of days, the novel takes on the brutality of the Hostile Environment and the failings of the care system. It challenges the Western notions of ‘normality’ that underpin psychologists’ assumptions about trauma and PTSD. And it questions our relationship with urbanised wild animals like coyotes and foxes. Even the notion of happiness, captured in the title, is questioned, its place taken instead by the more enduring notion of hope. 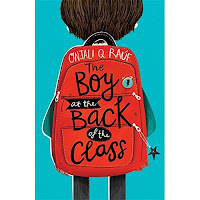 The Boy At the Back of the Class centres on Ahmet, a refugee child from Syria. But it is not the story of his perilous journey escaping a war zone and making his way to England. Rather it is the story of four friends at the primary school he starts to attend and how they react to learning his story. The story is told by nine year old Alexa, who doesn’t understand why with the new boy at the back of the class doesn’t speak or smile, or why he disappears every break and lunchtime. And she certainly doesn’t understand the way some adults talk about him – what is a refugee kid anyway?

A joyous, life-affirming book for middle readers about acceptance and the power to change the world

Built: The Hidden Stories Behind Our Structures by Roma Agrawal

Roma Agrawal’s Built is filled with infectious enthusiasm. A structural engineer who has worked on bridges and buildings including London’s iconic Shard, she takes you on a journey under the skin of city skylines and deep into their infrastructure.

This book was a joy to read! All the principles are explained simply and accessibly (with diagrams). And even if you don’t grasp some of the details, enthusiasm and wonder will carry you through. Agrawal will leave you with a profound respect for engineers and the magic they weave – magic that most of us scarcely give a passing thought to as we go about our daily lives.

Natives – Race and Class in the ruins of Empire, by Akala

Natives takes aspects of modern British society and traces their roots back into Britain’s imperial past – a past which present-day citizens have been taught to see only through blinkers and some heavily rose-tinted spectacles. Akala forensically examines Britain’s role in the slave trade (conveniently forgotten in our haste to pat ourselves on our backs for our part in ending it). He shows how class is systematically used to trap white and black people alike – but how the few that break free may escape class, but that race follows them wherever they go.

Both scholarly and personal, this is a book that will challenge your world view – particularly those of us who have, however unwittingly, inherited the benefits and privileges of our imperialist forebears.

I do not envy the judges the choice they have to make in picking a winner. I loved every single one of these. I have a personal soft spot for Roma Agrawal’s Built, because it rekindled the excitement and pleasure in maths and engineering that I had as a student . But if I must predict a winner it has to be Raymond Atrobus’s The Perseverance for giving voice so eloquently to the Deaf Community. We shall see!

[*EDIT] And as you can see - the winner was Guy Gunaratne's brilliant, eloquent debut novel, In Our Mad and Furious City.

The Healing Next Time by Roy McFarlane

Three sequences of poems by the former Poet Laureate of Birmingham that rage against the violence inflicted on Black people by the state. Reminiscent of poems like Di Great Insohrekshan and Inglan is a Bitch by Linton Kwesi Johnson, written in the wake of the New Cross Fire and the Brixton Uprisings, The Healing Next Time moves the story on another 30 or 40 years and, sadly, shows how little has changed.

Ponti is a debut novel by Sharlene Teo, set in Singapore, where Teo was born. It’s a sophisticated coming-of-age story that explores grief, loss, disappointment and their physical manifestations in teenage and young adult bodies. The rich language vividly evokes a world that will be unfamiliar to many readers, without the need to exoticise it. If your only reference for Singapore is an image of a skyline of glass and concrete tower blocks, this is an entry into a whole different world, that of the city’s ordinary inhabitants.

The Stopping Places: a journey through Gypsy Britain, by Damian le Bas


Damian le Bas comes from a long line of English Romanies based around Surrey. He was raised in a Romany family, speaks the Romani language and has suffered his fair share of anti-Roma prejudice. But because he is of mixed blood – with fair skin and fair hair – even some of his own family don’t fully accept him as a true Gypsy (the word, always capitalised, that he himself most often uses to describe his people). So one autumn he sets out in a white transit van to discover the aitchin tans – stopping places – used by Romanies and Travellers around the country. In the course of the journey, le Bas reveals there was a time when Romany life slotted in with the seasonal nature of farm work and a kind of coexistence was possible. The present day almost complete lack of tolerance by settled communities of Travellers and Romanies is, in the end , in the interests of no one.

Brit(ish) – on race identity and belonging - by Afua Hirsch

Rarely have I gone through a book highlighting so many passages. Hirsch brilliantly captures both the positive and negative aspects of having multiple cultural identities. On the one hand, it: “offers the possibility of full-body immersion, deep-sea diving; an experience that is difficult to pin down, but feels mystical and profound.” On the other, “at its worse ... (it) can feel like being helplessly adrift, unable to embrace the beauty of any one place, fearful of the water, awkward on land.”

Despite the depth of racism – structural and otherwise – in British society that it exposes, this book feels optimistic. But if we are truly to become a post-racial society, it is vital that we stop trying to pretend that we already are. We have to have the courage to have to difficult conversations, to acknowledge ugly truths about ourselves. To have humility.

It is the bitterest of ironies that the Windrush Scandal blew up in the year that was supposed to have been a celebration of the 70th Anniversary of the arrival of the “Windrush Generation” – those British subjects from colonies and former colonies who answered the cry of the “Mother Country” to come and fill the massive labour shortage resulting from years of war. There is a lot to unpick in that oversimplified summary of the situation, and Mother Country, telling as it does the individual stories of twenty-two of those immigrants and their descendents, does a lot to show the true complexity of their history.