One Woman's Struggle - Nasrin Parvaz discusses oppression, survival and the strength of women

by Catriona Troth
In 1979, Nasrin Parvaz returned from England, where she had been studying, and became a member of a socialist party in Iran fighting for a non-Islamic state in which women had the same rights as men. Three years later, at the age of 23, she was betrayed by a comrade and arrested by the regime’s secret police.

Nasrin spent the next eight years in Iran’s prison system. She was systematically tortured, threatened with execution, starved and forced to live in appalling, horribly overcrowded conditions. One Woman’s Struggle in Iran is both an account of what happened to her during those eight years, and evidence that her spirit was never broken.

In 1990 she was released and in 1993 she fled to England, where she has been a client of Freedom From Torture. She has given talks on the violation of human rights in Iran, both in Farsi and in English, in a number of countries. She has spoken at Southbank Centre (2015 and 2016), Bare Lit Festival (2016 and 2017), and for organizations such as Amnesty International, Cambridge PEN and Freedom From Torture.

Here Nasrin talks to Catriona Troth about her hopes for her memoir, for Iran and for women the world over.

When you started writing One Woman’s Struggle, did you imagine it would be published one day, or was it initially something you did for yourself, as part of the healing process?

I started writing it to publish it. Publishing was my only aim as my prime aim was to communicate. My personal experience is not just personal but is part of the universal history of oppression and struggle.


How did Freedom from Torture and the Write to Life group help you?

I received therapy from FFT for a few years and my therapist was really kind and helpful. She helped me in other areas of life, as well as in the therapy room. For example, I wanted to study psychology and she helped me to find a bursary, so I only had to pay half the price of the course. Things like this that I wasn’t aware of!

When Sonja Linden started the Write to Life group, I was one of her first clients and I must say, if it wasn’t for Sonja, and later on, Hubert Moore who was my mentor, I might have not continued writing! English was not my first language and I was trying to learn it by exchanging one-to-one lessons with people who wanted to learn Farsi.

The Write to Life group helped me in many different ways – including learning how to put my prison experience into words and how to write a story.


Your memoir has already been published in Farsi. Why is it important for you that it is being published in English as well?

Actually I first started to write it in English, but half way into it I realised it wasn’t good enough, so I began to write it in Farsi. I want to tell the world what is happening in Iran and to tell them that the government is carrying out crimes such as imprisoning and executing people for what they believe in – or what they don’t believe in.

Because of my personal experience when I started to write my book, I could only see that torture and execution were happening in Iran; but now I can see that this is happening everywhere. Some might say it’s not happening in western countries, then I’ll tell them that I see it whenever I walk down the road. Yes, the homeless people living in the streets of London and other cities of the world are subject to physical and mental torture. I no longer see that torture - as a means of crushing people - is something that happens only in prison, but as something that is part of the world’s system. Witnessing something so dehumanising is psychological torture for passers-by: it is for me. Every time I see a homeless person, the same feelings of frustration and helplessness I experienced in prison when I was being tortured or my cellmates were being beaten come over me and I feel depressed.


As much as the book is an indictment of oppression, it is a celebration of the strength of women and women’s friendship. How do you think that spirit survives when everything in the system is designed to crush it?

The strength of women and our friendship was one of the ways in which prisoners put up resistance to that system. The Iranian women’s resistance started in 1979, when only a few days after Khomeini arrived in Iran, he announced women should wear the chador – which is like a burqa, except that the woman’s face is uncovered. The next day, on the 8th of March women poured into the streets of Tehran and many other towns. It’s true that the regime eventually forced women to cover their hair; but it took three years till they made it a law and they couldn’t put women into sacks; head scarves became compulsory and nowadays, women are arrested if they don’t observe this law.

Unfortunately so many men have not supported women’s struggle against this sexual apartheid and actively benefit from it.

You've also written a novel based on your experiences - The Secret Letters from X to A. Can you tell us a bit about it? 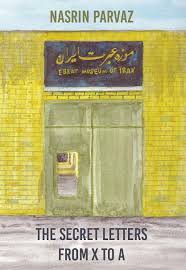 In Tehran there is a historic circular building once known as the Joint Committee Interrogation Centre. Its designers were German, so the balcony railings were decorated with Nazi symbols. Reza Shah ordered it in 1932 and it was ready in 1937. Political prisoners were tortured there. The Islamic Republic renamed it Towhid and started using it to crush the revolution of young generation who upon toppling the Shah were enjoying freedom of expression. Closed down in 2000, Towhid opened again in 2003 with a new identity: the Ebrat Museum of Iran, exhibiting displays of torture that the Islamic regime says were committed only under the Shah’s regime, and never under their own. I spent six months of my eight years' imprisonment in the interrogation centre that is now known as the Ebrat Museum. ‘Ebrat’ means ‘warning’. Children are frequently taken there on school trips.

The Secret Letters from X to A tells the story of Faraz, a young man who accepts a summer job converting one of Tehran’s prisons into a museum of the repressive rule of the Shah. He understands too late that this will mean destroying all evidence that the present regime, the Islamic Republic of Iran, has tortured and executed prisoners in this same building. Then he discovers a series of secret notebooks written by Xavar, a pregnant young woman who was interned there in 1984.
You can read chapter one of the Secret Letters from X to A:
https://www.victorinapress.com/the-secret-letters-from-x-to-a-chapter-1/

Why did you decide to turn your experiences into fiction, and how did it differ from writing the memoir?
I started to write about twenty years ago and my aim was to share my prison experience with people, as an act of struggling against the Islamic regime and to stop execution, torture and prison. At the time I was attending Write to Life workshops. During those workshops I wrote pieces which were not related to my own life or prison experiences. After a while I realised I had two piles of writing: one was related to my prison experience and the other pile was based on other people's life. So I worked on the second pile to make fictional stories and novels. Some of my short stories are publishes, and I have other novels to finish.

In writing fiction I could use my imagination freely and I enjoyed it, but writing my prison memoir was painful!

How optimistic are you for the future of Iran, and particularly for the role of women in the country?

I can’t separate Iran from the rest of the world. We all are in the same boat that is running fast with the current towards a future full of more misery, unless we do something about it. In Iran – the same as in the rest of the world - we need a just system that safeguards freedom and equality.

Regarding the women of Iran, I must say that they haven’t given up their struggle for freedom and equality with men. Since marriage gives all the rights such as divorce and custody to men, for many years it has been common practice for some women to ask their husbands to sign papers giving both parties equal rights. Many of the new generation don’t even bother with marriage and simply live together, even though this is illegal.


What is the most important message you would like people to derive from the book?

That we need to struggle for a just world: a world without torture and execution.

Thank you, Nasrin. I hope many people will support your book. It deserves to be widely read.

You can read Catriona Troth's review of  One Woman's Struggle in Iran  on BookMuseUK.