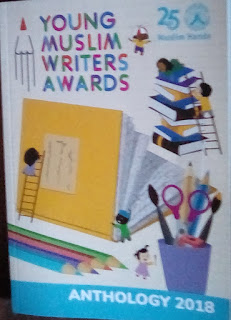 On the first of December this year, I had the pleasure of once again attending the annual Young Muslim Writers Awards, organised by the Muslim Hands charity. This event has been showcasing young talent since 2010. One of the early winners, Mina B Mohammad, went on to turn her short story into a novel which she published at the age of just 16. So the event, held this year in Senate House, University of London, is one I always look forward to.

In addition to the awards for writers in different age groups, YMWA also gives out a Special Award to a young person who has made an exceptional contribution to the education and empowerment of young people. In the first year I attended, three years ago, the award went to Malala. This year it was given to the children of Grenfell. The award was accepted by a group of eight children of all backgrounds who were all members of Kids on the Green – an organisation that is helping the young people to come to terms with the trauma they have suffered through music, art and drama. The group spoke movingly about dealing with panic attacks and flashback, of losing their homes and having to live in overcrowded hotel accommodation. Then they asked the audience to stand and hold a minutes silence in honour of the 72 Grenfell residents who lost their lives.

Once again, those presenting the awards reiterated the importance of hearing stories from the voices of all our communities.

Zainub Chohan, the awards’ organiser, reminded us of the words of Chimamanda Ngozi Adichie on the danger of the single story.

Irfan Master, author of Out of Heart, spoke of giving a writing workshop in a school where many of the children were of Pakistani and Bangladeshi heritage. When he invited them to begin by creating a character, they all started with character with white British names. When he challenged them, they told him, “No one wants to read stories about us.”

Tim Robinson from the Anne Frank Trust pointed out that he was standing on the stage where – in the recent BBC television drama, Bodyguard – the Home Secretary was blown up by a bomb. Many viewers followed the gripping series, only to be disappointed that the showrunners fell back in the end on the tired trope of a Muslim terrorist. These stereotypes need to be challenged, he said, and it is the voices of young Muslims that will do it.

As always, it was the children’s own words that spoke most powerfully. Robinson quoted from a Instruments of Harmony by Amiera, shortlisted in the KS4 poetry category.

We will catch the lost voices of the bold,

And let their stories be passionately told.
Finally the instruments of harmony will be played,
And our voices will sing in unity - no longer afraid.

Ameerah, winner of the KS 3 journalism award for Daggers Drawn, her piece examining knife crime in London described a woman who has just lost her son.

She sits across the table from me, clothed in a light Nigerian robe. Her hair is pulled pack in a neat bun; her face is perfectly made up. The only sign of trauma is in her eyes. Eyes that wander with no fixed point, glistening with tears. Eyes that do not seem to acknowledge there is another person in the room.

But these young writers also showed that they would not be pigeonholed into writing only about ‘Muslim issues.’

Umar who was shortlisted last year for his poem Oggletrog, won the KS1 poetry category this year for his poem Gluttbuts and Trumpalots that again channelled the linguistic playfulness of Edward Lear and Roald Dahl – but this time demonstrated an edge of political satire with its swipe at greed and excess consumption.

Gofradump Gluttbutt, greedy and sly,
Suited and booted in his dotty red tie
...
Pie factory owner and Chief Taster
Eats like a pig and a horrid food waster

Fatema, winner of the KS2 poetry award held the room spellbound reading her poem, Awakening: the wonderous journey from seed to flower.’

Dormant
we lie
swathed in robes
of cimmerian
shade

Winner of the KS2 short story award, Numa’s story A Feathery Tale, praised for the judges for its accomplished storytelling and elegant use of language, was a fantasy whose central character was a bird.

Lulu was a hoopoe, with a majestic crown of black-tipped feather that constantly opened and closed like an elaborate book. It was the closing of the day, the blood-shot sun bleeding into the sunset and diamonds encrusted the sky.

Finally, the Writer of the Year was chosen – winner of the KS4 short story award, Sabir Hussain Miah for his story The Worst Plan Ever. Caught on the hop – until he received the news that he’d been shortlisted he had forgotten he had even submitted his story to the event, and certainly didn’t expect to win! – he nonetheless spoke movingly about being inspired by his own experience of bullying to write his story about overcoming prejudice and finding the strength to come out of darkness.

This year, Muslim Hands had announced that was giving the Writer of the Year and someone from their family the chance to visit one of the schools that they have built around around the world. I hope the trip inspires Sabir to yet more amazing writing!

It is always such a pleasure to attend this event. The 2019 event is already open to submission – so parents and teachers, if you have a talented young Muslim writer in your midst, please do encourage them to submit!
LibraryCat
Share