A Short Story from David N Martin, winner of the Words with JAM Short Story Competition 2017

She walked and rode, and walked and rode again, and in three days, the bruise on her cheek yellowed at the edges. But soon her donkey could not bear her weight. It sagged in the heat, smelling of mange and rendered bones. She could not ride, but neither could she leave it to die.

The old women of Jamina’s village described her destination as ‘the valley of grass.’ They had told her whom she must find. Three times they had told her. Twice she ignored them.

“The third time,” the eldest said, “either you go, or live like this forever.”

Walking, her boots split their seams. Walking, her blood stained the leather. Walking, she considered the woman’s advice. She had never learned to count very far. Just far enough and no more.

Now she is here. Stopped on the count of three. Before her lies a flat green valley cut between the arms of towering rock that stretch into a sea: a mile and more across, reaching several miles to the coast. She feels herself breathe.

The only approach is the narrow gorge through which she has come. She listens as water cackles onto rock, some higher world leaking into this one through flaws in its steep sides. Waterfalls form streams. Streams form a river, feeding groves of trees and bushes. Tended crops of banana and aubergine line the wayside. And grass. Knee-high grass, just as they’d said.

The donkey drinks where the river bank is lowest, and she drinks after. Then she moves on downstream, leading the failing beast on its frayed piggin string. Around a bend, she spots a cluster of adobe houses. A handful. She does not bother to count. Her eyes stray to three women washing clothes at the water’s edge. Each is bent to the task in hand, a smooth stone her toolset, a wicker basket at her side. Naked skin-and-bones children run in and out of the river, splashing and playing. As thin as she is hungry. She wishes she had stolen a banana.

She slows as she nears them. If she stops, she has neither courage nor strength to go forward again, but she needs to prepare what she will say.

The first to notice her is the widest of the three women. They all wear billowing cotton tops and skirts to calf length, but this one opens like a bellows around her thighs. She pushes the matted hair off her face and squints with one eye.

“What do you want?” she says. Her companions follow her gaze.

This with no hello or welcome, so Jamina gives none back. “They told me come to the valley of grass.”

“Other women. They told me look for the cabinet maker,” she says, careful not to name the tellers.

The woman’s eyeline has dropped and, when Jamina follows it down, she finds she is twisting the wedding ring on her finger. She jerks her hands to her sides.

“The cabinet maker?” she says again.

“He comes here, drinks here sometimes. Takes some food. Takes what he needs. Once a month maybe.”

“And the rest of the time?”

“Rest of the time, he doesn’t bother us.”

The woman nods. “Better you don’t never have that kind of need. We all know that, but it can’t always be.” She extends an arm, pointing her finger. “Up that track a way. His place is under the mountain.”

The second woman says, “You ought to water that donkey. It’s fixing to drop.”

Jamina thanks her and tells her the donkey has already drunk its fill.

The woman smiles with crooked teeth. “Not going much further then,” she says. She has skin like a brown-cap mushroom, one eyebrow divided by a scar. The children are swimming. They all look the same. They all look happy.

Jamina heads for the track. No one says good-bye. No doubt they once came here for the same reason.

She follows a grey furrow through trees and bushes, skirting giant rocks as it heads towards the vertical cliff face that bounds the valley. It takes half an hour. The donkey stumbles behind.

The house she comes to is part adobe, part wood, its back swallowed into the rock as if someone has forgotten the difference between a home and a cave. A brush-roofed barn sits in the dirt yard among piles of rough-cut woods. Three axes, arranged by size, are embedded in the pile nearest the door. Chickens roam free. Two horses and several goats graze in a corral.

She does not want to be caught for a trespasser so she shouts. An echo comes and goes. She waits for silence. In it, she hears the muffled rasp of a hand saw. She lets loose the donkey’s string, goes to the barn’s open door and peers inside.

He is not as she imagined. His biceps bulge, but he is smaller than he should be. Older too. Sawdust clings in his hair and beard. He wears a shirt with no sleeves, wet stains extending like brackets under his arms. Around him lie the fruits of his labour: a handsome wardrobe, a half-finished sideboard, three coffins.

He stops when he sees her. He puts down his saw. She feels herself constrict as if all her body is pulling itself smaller. If she did not have bones, maybe she could disappear.

No one can disappear.

“You make cabinets,” she says.

He licks the dryness from his lips. His nod counts off the finished works arranged around the barn as if she might need help to find them. He wipes a bead of sweat from his forehead with the back of his hand.

“A coffin. They told me ask for a coffin.”

Atop of an upturned barrel sits a clay water jug and a pewter tankard.

He goes to the back of the barn and searches among scattered crates. He returns with a rough wooden cup to add to the tankard and pours water into each. He offers her the tankard. He reaches into his pocket and puts a peach onto the barrel.

Her hand shakes. She is unused to kindness. She takes the water, then the peach. The peach tastes like a bursting sun.

He leans his elbows on the barrel and watches her. He has noticed her bruise. He will not let it go.

“Where are you from?”

She names her village.

“They said you would help me.”

He does not seem surprised. “You have sizes? For this coffin?

She grips her ring with the thumb and two fingers from her opposing hand. She pulls it off, almost drops it, then places it on the barrel before him. She straightens her back and takes the deepest breath of her life.

He stares at the ring. “Gold?”

“It was my grandmother’s,” she says. “They sent me to you, the women.”

He picks it up, weighs it in his palm. Puts it down and shakes his head.

“Coffins are expensive… for the living.”

The ground seems to crumble beneath her. She looks at the ring. It seems that he’s right. It is so very small to pay for such a large thing.

The donkey has been wandering outside. He can see it through the open door. He takes a moment to think. She knows what he’s thinking.

“But that is everything… the ring, my donkey.”

“Sometimes it takes everything and all that is left after as well.”

She stares at the floor. Where shame must look, she knows. Those who sent her have warned her of this.

“What is worse? Ask yourself that,” the eldest women had said. “You submit to a brute again and again, or you submit once to a killer?”

She thinks of the naked children in the river. How they smiled.

Yes, she tells herself. She had decided this was what she could live with. Anything not to count past three.

“Then prepare yourself,” they said. “He’s taken that bargain with others.”

She finds the strength in her backbone. Her knees tremble, but she stiffens herself and reaches for the string at the neck of her dress. Her fingers fumble and fumble. Then she falls out of her clothes, standing naked bar her bloodied boots in a pool of cotton.

He examines her from a distance. At first she thinks he is considering her value against the contract, but soon she realises he is lingering on her damage.

It is not just the cheek. It is the scar over her breasts, the burn on her hip. Her right arm does not hang quite straight. All her beauties stolen.

She catches him as he rubs his finger under one eye, but she is not quick enough to see the reason.

“Put your clothes on,” he says.

It seems she has failed the test. But he shakes his head and looks over at the coffins. “Pick one,” he says. 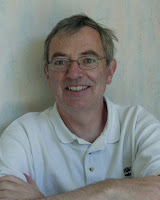 David N Martin started life as a scientist, having studied Physics at Jesus College, Oxford. He took up creative writing as a hobby in the Nineties while still in his mid-thirties, indulging his passion for Sci-Fi. Several short stories won local competitions and he placed in both the international Fish Prize and the HE Bates Centenary Memorial Competition. Gollancz published two of his novels (The Chessmen and Fatal Climate ) under the pen-name David Hood, scientific thrillers that showed off his technological background and had vaguely Science-Fiction themes as their back drop. ‘The Chessmen’ – described by The Daily Telegraph as a ‘contender for the best first crime novel of the year’, even though it wasn’t a crime novel – went on to be translated into German, Polish and Greek.

A long hiatus of almost twenty years followed as he concentrated on earning money and raising a family, though he has kept up his membership of Leicester Writers Club and been the frequent leader of Creative Writing workshops. He never published novels again. His recent win in the ‘Words With Jam’ Short Story Competition represented a return to serious writing.

David lives in rural Northamptonshire with his wife and two university-bound children. His website can be found at https://forgedtruth.wordpress.com/
Words with JAM
Share