In Conversation with Ruth Hogan

Reviews for The Keeper of Lost Things:

A debut to watch for… I was hugely impressed by this flawlessly written, most humane novel. (Ronald Frame, Sunday Herald (Books of the Year))

A warm and heartfelt debut. (Prima)

This mystical and spiritual tale is a joyous read that will broaden your imagination and warm your heart (OK!)

Magical and moving (Heat)
Hello, Ruth, welcome to WWJ. Tell us a little about yourself and your writing?

I was born in the house where my parents still live in Bedford.
As a child I was obsessed with dogs and ponies (I still am) and wanted to be a vet. I was always reading, and frequently had to be forcibly parted from a book at mealtimes. I read everything I could lay my hands on so it was very fortunate that my mum worked in a bookshop. My favourite reads were The Moomintrolls, A Hundred Million Francs, The Lion, The Witch and The Wardrobe, the back of cereal packets, and gravestones.
I studied English and Drama at Goldsmiths College, University of London. It was brilliant and I loved it. But then I came home and got a proper job.
I now live in a chaotic Victorian house with an assortment of rescue dogs and my long-suffering husband. I spend all my free time writing or thinking about it and have notebooks in every room so that I can write down any ideas before I forget them. I am a magpie; always collecting treasures (or ‘junk’ depending on your point of view) and a huge John Betjeman fan. My favourite word is antimacassar and I still like reading gravestones.

Your debut novel The Keeper of Lost Things has become a bestseller. Can you sum it up in a single paragraph?

No! I’m really bad at writing short synopses so I’ve pinched this bit from the summary on Amazon.
Meet the 'Keeper of Lost Things'...
Once a celebrated author of short stories now in his twilight years, Anthony Peardew has spent half his life collecting lost objects, trying to atone for a promise broken many years before.
Realising he is running out of time, he leaves his house and all its lost treasures to his assistant Laura, the one person he can trust to fulfil his legacy and reunite the thousands of objects with their rightful owners.
But the final wishes of the 'Keeper of Lost Things' have unforeseen repercussions which trigger a most serendipitous series of encounters...

After a decade working in human resources, it took big life changes in your personal life before you became a full-time writer – what gave you the confidence to take the plunge?

For years I’d clung to the security of a sensible, well-paid job. I had a mortgage and bills to pay, and writing was just a hobby. But in my early thirties I had a car accident which left me unable to work full-time and convinced me to start writing seriously. I was still working part-time as a receptionist, but writing became my main focus. Then in 2012 I was diagnosed with cancer and that was a game-changer. I vowed that I would take every opportunity that came my way and if I ever got the chance to become a full-time writer I’d chase it as hard as if my pants were on fire! I was extremely lucky that the initial publishing deals for KEEPER paid well enough for me to give up working as a receptionist and concentrate on being a full-time author. The rights for KEEPER have gone on to sell in 19 territories so far, so it was a risk that proved to be well worth taking.

What one piece of writing advice you’ve been given do you find invaluable and would like to pass on?

The best piece of advice that I’ve been given was by an agent who rejected KEEPER. She told me to remember that this (meaning the publishing industry) is a ‘business of opinions’ and although she didn’t feel that my novel was for her, there might be someone else out there prepared to take it on. She was right.

Where do you find inspiration for your novels?

Everywhere! Wherever I am, whatever I’m doing, I’m always watching people and the situations they find themselves in. Whenever I see a striking building or landscape, I always think ‘how would I describe that?’ I’m also a documentary junkie and forever cutting news items, personal ads (and occasionally obituaries) out of newspapers and magazines. 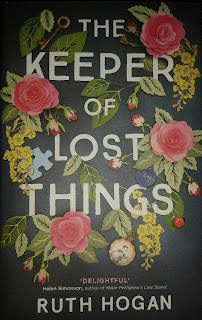 How do you set about creating your characters? Eg, where did the character of Anthony Peardew and his lifelong obsession come from?

Anthony was inspired by a former neighbour of mine who became an extreme hoarder after his fiancée died. I have a notebook for potential characters. Whenever I see someone interesting or get an idea for a character, I describe them in my notebook. I also use other people’s photography as inspiration for characters – for example Diane Arbus, Martin Parr, Doisneau, Tony Ray-Jones and William Eggleston.

What’s the hardest thing about being a writer?

The hardest part is the time spent waiting. I’m not a patient person at all, and when my work is out on submission to publishers I find the waiting excruciating. I have to keep myself distracted by finding lots of things to do!

And what for you is the best thing?

Everything else. It’s my dream job/life.

What three books would you have to take with you to your Desert Island?

UNTITLED by Diane Arbus, PRIDE AND PREJUDICE by Jane Austen and a book about how to survive on a desert island.

Which author do you most admire?

It’s impossible to choose just one, but the man who made me want to write was Eric Malpass after I read his book MORNING’S AT SEVEN.

Can you tell us anything about your next novel?

It is essentially a story of empowerment, hope and redemption. Masha, a woman in her early forties, has suffered a terrible loss and we follow her journey from a very dark place through to a completely new life. She’s inspired to change by two of my favourite characters in the book; an old lady who feeds the crows in the park and sings opera in the local cemetery, and a seventy-year-old amateur dramatics diva and roller disco fan who’s dating an undertaker named Elvis. Some of the darker themes explored in the book were inspired by my own experiences, but there’s also a healthy dose of humour and a cast of eccentric (and hopefully!) loveable characters. And, of course, there are dogs. It will be published by Two Roads Books in May 2018.

Thank you, Ruth! Good luck with your writing.

See our Bookmuse review of The Keeper of Lost Things HERE