Writing Fiction in a Second Language - an interview with Helena Halme

Writing fiction is hard enough for those of us for whom English is a first language. How on earth to authors manage it when English is their second - or even third or fourth - language? We talk to Finnish author Helena Halme.


You were born and brought up in Finland and Sweden but have lived in London a long time now - so you are trilingual. What was the first language you remember writing a story in?

I wrote my first story at school in Finland, so it was in Finnish. But over in Scandinavia we place a huge emphasis on learning other languages, so quite early on we wrote essays and stories in English, Swedish, French and German too. The first ‘serious’ stories I wrote were in English after I’d moved to Britain.

Did you speak English before you came to live here? Was it a tough language to learn? What was it like coming to grips with colloquial English?

I began learning English at the age of seven, and through popular culture (mainly TV in those days), I was exposed to a lot of English well before I moved here. All the same, I didn’t really learn the language completely until I worked at the BBC as journalist/translator. The learning curve was fairly steep there because I worked in news reporting and often had to produce content at a very short notice.

Apart from the obvious commercial reason of the size of your potential readership - why choose to write your novels in English?

This is a question I’ve been asked so many times, that if I had a penny for every occasion, I’d be a rich woman by now! But of course I understand why readers and other writers ask this, because it is quite unusual to abandon your native tongue. But to me it was a natural progression.

When I moved to the UK at the age of 22, as a newly married Navy Wife with a husband who was away at sea more than at home with me, I was very lonely. To keep myself busy (and sane!), I began writing a diary in Finnish, but soon found it hard to describe some of what was happening to me in my native language. So I flipped the diary over and began writing in English on the other side, a little like Anna Wulf did in Doris Lessing’s The Golden Notebook (which is one of my favourite novels). Soon the English side took over and I haven’t looked back since.

Have you ever, as an adult, written stories in Finnish? Have you any plans to do so? Do you think you would be telling a different kind of story if you were writing in Finnish?

To me writing in English seems the most natural thing to do, but I have recently been thinking about writing a novel in Finnish. I do think the stories would be different, because the language is so close to my heart and touches me on a different emotional level. I once joked with a fellow Finnish author, who also writes in English, that if I had to write in Finnish I’d be weeping the whole of the time. But it would be a wonderful challenge, and I may well do it one day.

When you begin to imagine the stories in your head, which language are you thinking in? Or (like my mother, who is Welsh/English bilingual) does that question simply not make sense to you?

Actually that question absolutely makes sense to me. For a writer the language is a tool, which you need to keep sharpened at all times. I think in English when I write and when I imagine scenes. I often find myself talking to myself (in English) when I’m walking my little terrier. I’m certain my fellow dog walkers think I’m completely barking (as it were!) But when I’ve been visiting Finland, or I have family or friends over here, it takes me a little while to get back to writing in English again. It’s sad, but nowadays I have to limit my reading in any other languages too. This, I think, is one of the main reasons I may be a little afraid of going back to Finnish – what if I’m never be able to switch back again?

What do you think are the greatest challenges of writing in a language that is not your native tongue?

I see writing in English as a foreign language a huge opportunity. I’ve been told that I have a unique voice, something which I’m incredibly grateful for, and which I believe is due to my Finnish/Swedish upbringing. But of course there are challenges too. Sometimes I can’t see what the correct preposition should be, or I get popular expressions or proverbs wrong. But writing in another language also makes you incredibly conscious of possible mistakes, so I tend to be very careful about grammar, spelling and so on. Naturally, I use professional editors and proofreaders to correct my work, as any published writer should. 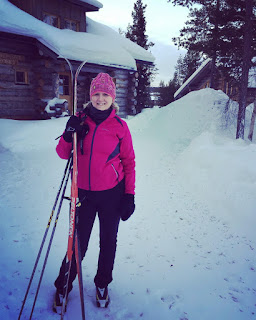 Are there things from your Finnish background that you find hard to express in English? Can you give us some examples?

In a way, explaining Finnish – and Nordic – culture is my trade. All my books are set partly in Finland or Sweden, and all of my five novels deal with displacement and the differences in Nordic and British daily life. So no, I don’t find explaining Finnish culture difficult at all. I revel in explaining how Nordic homes are so well heated and insulated that you have to wear t-shirts and shorts inside while the temperatures hit -20C outside; or how Finns don’t do small talk, and say what they mean. I absolutely love explaining these little, but significant, differences between our countries!

Finally, can you tell us what you are working on at the moment?

My current project is the fifth book in The Englishman series. The first novel in the series was born on my blog some ten years ago, when I started telling the story of how I met and married my British Navy Officer husband. The resulting novel is a fictionalised account of my early life in the UK, and the series has developed further and veered quite heavily away from my own life. Book 5 hasn’t got a title as yet, but privately I’m calling it ‘The Baby Book’. Make of that what you will! 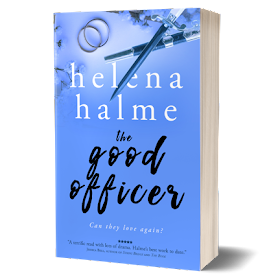 Helena Halme is the author of The Englishman, a best-selling Nordic romance, which won an Awesome Indies badge on publication. The tumultuous 1980s love story between a Finnish girl and a British Navy officer is now a series of four books, including a prequel novella, The Finnish Girl, the sequel The Navy Wife, and Helena’s latest title, The Good Officer, book four in the series.

Helena grew up in Tampere, central Finland, and moved to the UK via Stockholm and Helsinki. She is the winner of the John Nurmi prize for best thesis on British politics, a former BBC journalist, and has also worked as a magazine editor and a bookseller and, until recently, ran a Finnish/British cultural association in London. Her articles have been published in the CoScan Magazine, The ScanMag and the Finn-Guild Magazine.

After gaining an MA in Creative Writing at Bath Spa University, Helena began to take writing seriously, and is currently working on the fifth book in The Englishman series. She has recently been appointed Nordic Ambassador for The Alliance of Independent Authors. Helena lives in North London with her ex-Navy husband and an old stubborn terrier, called Jerry. She loves Nordic Noir and sings along to Abba songs when no one is around.