In Conversation with B.A Paris

B.A. Paris is from a Franco/Irish background. She was brought up in England and moved to France where she spent some years working as a trader in an international bank before re-training as a teacher and setting up a language school with her husband. They still live in France and have five daughters. Her debut novel, Behind Closed Doors, a psychological thriller, became one of the best selling releases of 2016. She is about to launch her follow-up novel, The Breakdown, and we are lucky enough to get a sneak preview of the 'blurb'!

The Breakdown : One night, during a storm, Cass sees a woman in a car. The next day the woman is found dead. Cass begins receiving silent calls, which lead her to believe that someone saw her in the woods that night. She is also experiencing problems with her memory. Is she losing her mind – or is it just the guilt she feels in relation to the woman in the car?


Hello and welcome! Can you tell us a little about you and your writing?

Thank you, I’m delighted to be answering your questions today. I always wanted to write – it was always there in the background - but I never had time until a few years ago, when my two elder daughters left home. I always thought I would write stories for children but I had an idea for a novel and decided to give it a go. I finished writing it in a couple of months and loved every minute of it. So I carried on writing and eventually wrote Behind Closed Doors.

You’ve taken the literary world by storm this year with the release of your debut novel ‘Behind Closed Doors.’ A huge bestseller, over 6000 reviews to date on Amazon, how has your life changed since the success?

Not that much. I live in France so I travel over to London quite a lot for meetings and events, which I really enjoy as I never went anywhere much before! The best thing is that in September, I was able to reduce the number of hours I work, which means I now have more time to write.

What was the inspiration behind the novel?

I’ve always been fascinated by what goes on behind closed doors and I once knew a couple who appeared to have a perfect marriage – but then I began to wonder if it wasn’t as perfect as it seemed. It gave me the idea for a story and Behind Closed Doors was born. 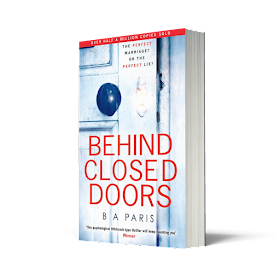 I’ve been unable to learn very much about you by researching online, is that a personal choice, are you a private person and hope to stay that way?

Yes. My friends here in France only found out a month ago that I’d written a book and it wasn’t me who told them! I didn’t really want anyone to know apart from my family and close friends but the secret is out now.

You’re based in France, is location and setting something you consider important in your writing?

For the moment, anything that I’ve written has been based in England. Most of the actual locations are imaginary, although they may be based on a house or a town that I know. It’s important that in a house I have the exact layout fixed in my mind, not just the rooms but right down to where the appliances stand in the kitchen.

What attracts you to your genre of psychological thrillers?

I enjoy trying to think of ways the characters can outwit each other; this was especially true in Behind Closed Doors with Jack and Grace. I also like the pace and tension involved in creating a psychological thriller.

Would you like to write in a different genre one day? If so, what and why?

I would like to write psychological dramas that don’t necessarily have the thriller element - I’m not sure I could keep coming up with suitable thriller plots.

What themes interest you as a writer?

The relationships between people, either couples or within families.

If you could give three top tips to newbie writers – what would they be?

Accept criticism as a positive thing. Be relentless in discarding something you know isn’t working. And finally, the most important - never give up.

Finally, your next book ‘The Breakdown’ is out early 2017- how difficult was it writing the ‘difficult second book’?

It was more difficult than I thought it would be – but apparently not as difficult as writing the third book will be!