Did you know that Bram Stoker’s Dracula has homoerotic aspects? Count Dracula, for example, warns off the female vampires and claims Jonathan Harker, saying, “This man belongs to me!” Stoker was influenced by Sheridan le Fanu, whose novella Carmilla invented lesbian vampires.

It was pretty tricky to write queer fiction in the 19th Century. In fact, right up to the 1950s, British authors could be prosecuted for writing openly about homosexuality. Queer references were written in a kind of code, using allusions and discreet subtext. Oscar Wilde was very daring when he wrote The Picture of Dorian Gray. Reviewers at the time said he merited prosecution for offending public morality.

Which brings us to this century. And my ventures into writing queer fiction.

As a commuter on the Metropolitan line into London for many years, I wrote short stories to amuse myself. I’m a life long fan of detective novels, and finally I plucked up the courage to write one for myself.

It was a form of therapy. I was late coming out, very late. Writing helped me come to terms with myself. I wanted to write a book where the central characters, plus the majority of supporting characters, just happened to be gay. The book would be the opposite of most detective fiction. I didn’t want the gay characters to be oddities. When I was immersing myself in queer fiction, I found too many novels had queer characters that were full of angst. Victims. I wanted my characters to be positive. 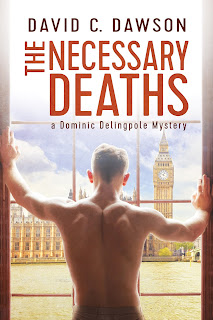 So that’s how Dominic Delingpole and his partner Jonathan McFadden were born, in the Dominic Delingpole Mystery series. Neither of them is modelled on a single individual. They are a rich mixture of gay men I have encountered over the years.

The writing process was long; a little over three years. After the first draft, I was lucky enough to go on a five-day Queer Fiction course run annually by the admirable writers’ education organisation called Arvon. There were nine of us, plus two tutors, in a beautiful old house in the wilds of Yorkshire. We had no internet connection and no mobile phone signal. But we had great company and spectacular views.

The tutors, very politely, ripped my book apart. So when I got home, I stuffed it in a drawer and got on with everyday life. It was my boyfriend who nudged me, cajoled me and nagged me into taking it out of the drawer, and having another go.

I went through three redrafts, and I was still unhappy with it. But this time, it was my son who asked the question: “What’s the point if you never send it to a publisher?”

When I looked around for a publisher, I wanted one who actively promoted gay literature. I was very lucky to find an American house called DSP Publications, part of DreamSpinner Press. That’s when I found out just how rich the queer genre is.

There are thousands of books published each year with strong, queer characters at the heart of them. There are romances, thrillers, horror, science fiction, westerns. There are so many sub-genres to this wonderful genre.

DreamSpinner Press was set up ten years ago, just as eBooks and internet distribution was gaining in popularity. Its founder, Elizabeth North, saw a gap in the market for gay romances. A few years later, she set up DSP Publications to serve other queer genres.

The internet has revolutionised queer fiction. Historically, very few bookshops would stock queer books. It took a demonstration at Barnes & Noble in the 1980s to force them to devote a shelf to queer culture. In the UK, you would have to travel to London and the amazing Gay’s the Word bookshop near King’s Cross to buy a book on a gay or lesbian theme.

Today, there are thousands of queer fiction titles online. Not just on Amazon, but the Apple bookstore, Barnes & Noble, Waterstones and so many more.

My novel, The Necessary Deaths, is a gay mystery thriller. This is a rich sub-genre. There is a thriving Facebook group devoted to it, and I am honoured to be a member of the International Thriller Writers’ Association, where I have met several other writers of gay thrillers.

Just before The Necessary Deaths was published, I was a guest speaker at a queer writing conference and book festival called UK Meet, held in Southampton. I was fortunate to meet other novelists from around the world, who were all very welcoming. I was also able to meet a number of enthusiastic readers of queer fiction. That was a great privilege. Suddenly, my writing was no longer my personal therapy. I met people who felt a great sense of belonging, as a result of queer fiction, when in the past they had felt isolated.

I’m now part of a worldwide community of queer fiction writers and readers, who are giving me wonderful support as I work to complete the next book in the series.