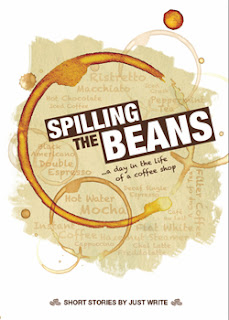 
Many writing groups have produced anthologies of short stories, and many of those have had common themes running through them. But the members of the Just Write group, based in Amersham, Buckinghamshire, set themselves a far more intriguing challenge.

All twenty stories in Spilling the Beans take place in a single day in the same coffee shop. And each one, from 'Ristretto' to 'Hazelnut Steamer', has the title of a drink served in the shop. More than that, the same characters weave in and out of the stories, brushing up against one another’s lives – sometimes colliding, sometimes barely noticed.

In many ways, this anthology has more in common with serial novels such as Alexander McCall Smith’s 44 Scotland Street. Many of the stories are not self contained. They leave tantalising loose threads, some of which are picked up later, while others trail out of the coffee shop into a future we are invited to imagine. Taken singly, this might make for frustrating reading, but the pleasure in this anthology comes from the way the stories weave together into a satisfying whole. 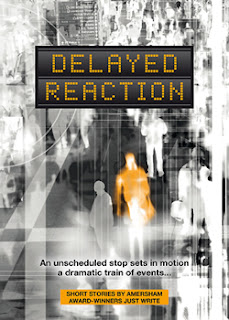 Their second anthology, Delayed Reaction, based on the same principle of interlocking stories (this time focused on passengers trapped on a delayed train) was published in November 2015. And they are now in the process of planning a third. I joined them to find out how the original concept was born, and how they go about planning and executing such a complex project.

The germ of the idea came from the creative writing class (led by author Sally Norton) where the Just Write group all met, explains Lesley Close.

“Sally had given us an exercise to write about one scenario – a theft – but from the point of view of different witnesses. We thought this would be a fun idea to recreate during the first long summer holiday out of class.”

The idea for a subject to tackle then grew out of a story by group member, Liz Losty.

“Liz wrote a great story about an elderly woman coming into a coffee shop, asking for ‘a cup of coffee’ and then being bamboozled by the array of strange sounding options she was confronted with.”

That seemed to spark something. That same day, the group came up with a list of drinks you could buy at a coffee shop and divvied them up between them. As all the stories would take place in one day, moving from opening to closing, they also worked out a timetable for when the drinks would be ordered.

After that, each writer was free to decide what sort of character might order that drink, and to develop their stories wherever their imaginations led. A certain amount of back story was permitted, but as little as possible outside the door of the cafe, and nothing beyond the single day. Once the stories were written, they were submitted to the group for critiquing and to ensure that the stories all work together.

“You must be flexible,” author Emma Dark says. “There has to be a willingness to tweak your story to fit in with others.”

Even with so much preparation, they soon realised even more advance brainstorming could have helped.

“One author came up with a vivid description of the shop, which then had to be incorporated, to a greater or lesser extent in all the other stories.”

That was a lesson they took to heart when it came to planning Delayed Reaction. Before starting to write, they fixed the day and date for the event, chose a genuine train service (15:08 from King’s Cross to York), and decided exactly where the train would stop. Close did a recce to provide a description of the train and of the landscape through which it would pass. They even spoke to a railway engineer to iron out technical details.

From brainstorm to publication, each anthology takes many months in development. After brainstorming, they write their stories through the winter, giving themselves a final deadline in May. The combined manuscript is then edited over the summer, and with the first manuscript proof delivered in September. They then go to press in October, ready for Christmas sales.

When it came to the publication of Spilling the Beans, they wanted to raise money for charity, and a close connection of one of the writers to a patient at Royal Marsden Hospital made it the obvious choice. This undoubtedly opened a lot of doors for them and the anthology is now stocked in various locations (including two local hotels, who keep copies in every bedroom). As a result they have, to date, raised £1k for Royal Marsden, and helped to purchase a special ultraviolet room steriliser for the hospital. That connection has continued with Delayed Reaction.

For their paperback copies, the group has chosen to use short-run printing, rather than print-on-demand. Short-run printing is often out of the reach of a solo self-published author, but as a team, they can split the cost, and know that they can each shift a certain number of books themselves.

One of the strengths of both the anthologies has been the unified design of the books, the work of group member Stuart Tennant, who has a background in design, and his colleague Oliver Payne. It shows in details such as the line drawing of a cup or glass that opens each story in Spilling the Beans, and the little pattern of coffee beans that closes them. That book even finishes with a ‘Closed’ sign rather than ‘The End.’

It is this sort of attention to detail, together with impressive planning and organisation and a willingness to cooperate and function as a team, that has led to Spilling the Beans winning Writing Magazine’s Writers’ Circle Anthology Award 2014.

Read my review of Spilling the Beans on Book Muse UK.
LibraryCat
Share