Inside the Mind of an Author: with Richard Beard, Emma Healey and the National Academy of Writing

I wasn’t sure what to expect when I attended my first Public Edit with the National Academy of Writing (NAW).

NAW was set up to give writers the chance to learn directly from other writers. It is not linked to any university, and does not issue degrees or certificates. But it does offer an exciting range of events and courses of varying lengths. This particular event – run in conjunction with Writers & Artists and held at the London offices of Bloomsbury Publishing – was my first taste of what they had to offer.

We had been invited to submit short pieces of writing, of which two would be selected at random for editing. But what sort of editing were we in for? Presumably it would be more than just an exercise in proofreading, but would we just be given a lecture of the overuse of adverbs, or would this go deeper?

We had all been sent the selected texts in advance, so we could read them through and form our own ideas. The person guiding us through the edits that evening was novelist and Director of NAW, Richard Beard. I was impressed that he immediately focused on the type of work it was – its genre, in the most specific sense – and then examined the issues that arose from that, with concrete examples from the texts presented.

The first text selected was the opening chapter of an intriguing piece of speculative fiction by Felicia Yap – whose book I am now eagerly awaiting.

Beard identified two key issues for speculative fiction. First you have isolate the essential difference between your world and the normal world, push the consequences of that difference to the limits, drilling down and asking all the questions a reader might ask. Secondly you must be wary of raising other types of questions, especially early on, because the reader will have enough uncertainty to deal adjusting to this new world. If you achieve both things, the reader will sense your confidence in your world and trust you to lead them through it.

The second piece was a more straightforward contemporary short story, written in reportage style. Here the issue Beard skewered was the danger of letting a character, ‘look away,’ ‘say nothing,’ or ‘have no idea.’ All of those, he said, are lazy writing that make a character look weak or passive. Much better to get inside the character's head and work out what idea they DO have.

POSTSCRIPT: Very excited to hear that the UK and Commonwealth rights to Felicia Yap's book have been snapped up by Headline’s Alex Clarke ahead of LBF2016. Not a bit surprised, after reading the 'taster' here.

A Glimpse inside Emma Healey’s Notebooks 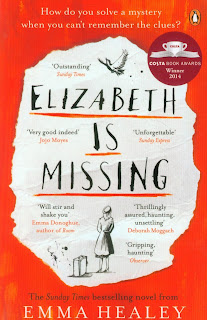 The second part of the evening was truly fascinating. How much would you give to have a peek inside the notebooks of one of your favourite writers? Well, that was that opportunity we had, as Emma Healey, author of last year’s Costa First Novel Award winner Elizabeth is Missing, opened the doors to her writing process.

And yes, I do mean a literal peek inside her notebooks. Despite what you might expect of today’s computer born generation, 23 year old Healey is still wedded to physical notebooks, for collecting notes, for sketching drafts, and for organising her editing. She showed us snapshots from those treasures, and even handed round copies of her colour-coded and hand-annotated planning charts for Elizabeth’s dual timeline.

Intriguingly, those notebooks included plans of Maud’s house, in the present and during the war, and a town plan made, apparently, from cutting and pasting a map of Bournemouth to bring things closer together.


Healey confessed to being a disorganised writer, whose daily writing routine rarely matched the idealised one she set herself. She is also clearly a very visual writer, who uses pinboards full of pictures to inspire her and give depth to her descriptions.

“The picture might have nothing to do with your story, but they might suggest colours or textures or the way someone sits ...”

She is a squirrel, keeping a ‘commonplace book’ of photos, newspaper articles and other things that have caught her attention, and writing down snatches of overheard dialogue wherever she goes. And she is also a great believer in physical research. For Elizabeth, she not only spent time talking to people in care homes, but with impressive attention to detail, also put an advert in the Bournemouth local paper to make sure that she knew both the process and the physical surroundings.

When it came to editing, Healey described her processes, which included:
And then, of course:
Inside the cover of one of her ‘editing’ notebooks, she had pinned a list of things to check for.


Healey’s willingness to reveal herself was refreshing and inspiring. If other guest authors are as frank and entertaining, I can highly recommend booking yourself onto another of these events, should the opportunity come your way.
LibraryCat
Share