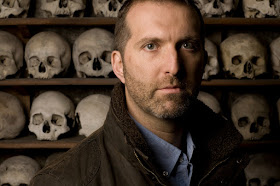 Guy Saville is the author of The Afrika Reich, an international bestseller. Born in 1973, Saville studied literature at London University. He has lived in South America and North Africa and is currently based in the UK. His latest novel, The Madagaskar Plan, was released in September 2015.

Welcome to Words with JAM. Could you tell us a bit about your new novel, The Madagaskar Plan …

It’s great to be here! The Madagaskar Plan is an alternative history thriller where the Nazis won the war and conquered Africa. There has been no Holocaust; instead the entire Jewish population of Europe has been deported to Madagascar (a huge, remote island off the east coast of Africa). This set-up is based on real Nazi plans and is the background for an epic tale of love, revenge and survival.

My favourite scene is towards the end of the book and too ‘spoilerific’ to share here. However, there’s one earlier in the book that springs to mind, what I refer to as the ‘tent scene’. Outside the rain lashes the canvas; the interior is dry and warmed by paraffin lamps. It is the setting for an unlikely duel of wits. There’s something very evocative about the scene and I love the details in it: the mirrors hanging from the roof casting a hypnotic light, the smell of freshly roasted chicken, the scratch of a fountain pen on paper. (Anyone who’s read the book will know the scene.) For all the action in my books, it’s these quiet, intimate moments I often enjoy the most.

And do you have a favourite character?

That’s sort of like asking if you have a favourite child! I admire Burton, the hero, for his single-mindedness; and Madeleine, the main female character, for her toughness and determination to survive. I also can’t help but like the villains: they’re ghastly but with an undeniable charisma. And I always make sure the supporting characters are memorable (this is especially important if they only feature briefly). In short, I can’t write any character unless there’s something that draws me to them.

Afrika Reich was a huge success. Did you feel pressure to write a second book that was equal to if not better than the first?

Once you’ve had a success in publishing there’s a lot of pressure to do the same thing again. When I sat down to write The Madagaskar Plan I had two objectives: 1) to write something different 2) to write something better. So, yes, I did feel the pressure... but it was more of my own making.

It’s been a long time since the publication of your first book. Did you find the second harder to write than the first?

Yes. With the first book, I mapped out the entire plot from beginning to end before I began writing (a process that took nine months). With the follow-up I had a deadline to meet, so I didn’t have the luxury of this planning stage. It caused me a huge amount of problems because I was writing without knowing where I was going. I know some writers thrive on this, but it brought me to a grinding halt as I literally lost the plot. Eventually, things got so bad I had to negotiate a new deadline, then plan the whole book from beginning to end before I started writing again. Madagaskar has a more complex, interweaving structure than the original so this map was invaluable. After that things were easier.

The other challenge was making it stand-alone. I had to assume readers weren’t familiar with the first book (or because of the gap between books had read the first one a long time ago and wouldn’t remember all the details.) The trick was to include enough information so people understood the world and backstory without having to re-tell the entire plot of the original. The initial reaction from readers suggests I pulled it off. 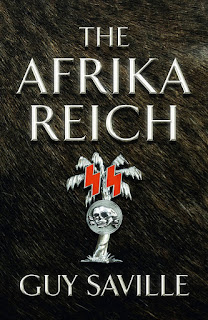 Historical novels inherently come with huge amounts of research. How did you go about tackling that and did you enjoy it?

I always think of research as mining: a process of starting at the surface, then going deeper and deeper to find precious nuggets. I start with generalist texts, then follow their footnotes and bibliographies to the next strata of books and papers, then repeat the process through to academic publications and finally the original archive material. I think I overdid it with Madagaskar because by the end I probably had enough to write a non-fiction book. A lot of that material had to be discarded for the sake of the narrative. There’s an element of drudgery to the research process – but also exhilaration when I stumble on a fact or detail that’s a gem.

Which authors inspire you and why?

Among contemporary writers, Robert Harris and Sarah Waters as they’re able to combine cracking stories with a brilliant attention to historical detail. I also admire the earthiness of William Boyd and his humour.

Do you have a favourite place where you like to write?

I have a log cabin at home which is my office and the main place I write. It’s at the end of my garden and surrounded by fields so very peaceful. I have a big desk, a comfy armchair for reading, and shelves and shelves of books – so it is the perfect place to be creative. I feel very lucky.

As an historical novelist, how do you feel about the recent destruction of ancient ruins in Palmyra? 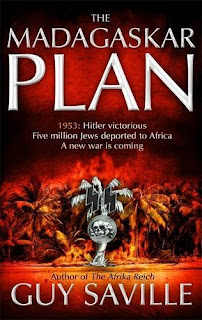 I’ve travelled widely in Syria and have visited Palmyra. It was an amazing, atmospheric experience and one I treasure. So watching Palmyra’s destruction on the news has been particularly painful; it feels personal. I appreciate that ancient sites fall into ruin or are destroyed by natural events but to see the place so wilfully and nihilistically destroyed is a tragedy.

Would you ever consider writing in the present or about an historical event without it being alternate history?

There’s one more Afrika book – but I’m not by inclination a writer of alternative histories. It’s more just a coincidence. So yes, I do plan to write books set in the present and based around real events without any deviation from history. Indeed, one of the books I’m currently pitching to my publisher is set in the near future. In years to come, looking back at my output, the alternative history of the Afrika books will seem the exception rather than the rule.

I was hoping you’d ask a serious question! ‘Padana’: goat’s cheese, caramelised onions, red onions and spinach. Pizza Express does a particularly good one if anyone wants to take me out for lunch...

Want to win a signed, hardback copy of The Madagaskar Plan? We have a US and UK copy to give away. To enter, simply fill in the form here.