In our regular series, international writers share some snapshots from their part of the world.
This issue, Carl Plummer offers his perspective on Shenzen in the Guangdong province of China.


What’s so great about China?

Chinese people ask me this, usually expecting something about the history, scenery and food. Yes, the scenery is fantastic in places like Guilin, but you can spend half a day driving through concrete suburbs before you actually see some green, or even a clean river. My favourite place was Guangzhou, where I lived in a small village just off a main road. These villages are cramped, grubby, bustling and noisy – full of ordinary people searching for or making their fortune. They are more Chinese than the main city streets you find in large cities. Go to any large city and you could be in London, New York or Paris; just the same shops, same styles – something I’ve heard tell about High Streets in the UK these days. 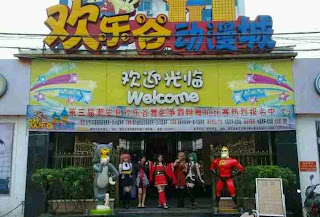 Tell us a bit about the cultural life of the place.

The Chinese invented, are masters of fast food – steamed, boiled, fried, in bags, on sticks, in pots, sending smells wafting up the sides of tower blocks. Food is everywhere, with its packaging discarded like autumn leaves along every thoroughfare. The younger Chinese are a little more careful with litter, but the older ones drop anything without a second thought. Of course the food is wonderful, but I was pleased the other day to find a bottle of HP sauce, and Cumberland sausages in an international supermarket. Food from home can be a rare treat, and best kept as a rare treat. Wonderful as Chinese food may be, McDonald’s and KFC are everywhere, packed with grandparents shovelling French Fries into the mouths of little emperors. You think there’s a problem with obesity in the UK, well, it’s starting in China – in the richer areas – and such places are seen as exotic, perhaps in the way we welcomed the first Chinese restaurant in my old stamping ground of Salisbury in the 70s. 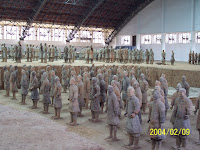 History is strange. Much of it was systematically removed by the Communist Party during the 50s and 60s. Zhou Enlai did manage to stop Mao from destroying the Forbidden Palace. The Great Wall is best seen from high up as you fly into Beijing from the north. I visited the Terracotta Warriors many times when I lived up in Xi’an. Looking at rows of soldiers is not very exciting after a few visits, but I am always fascinated in the mass-production techniques used; a production line that would have made Henry Ford green around the gills.

Finding reading material is not very easy in China if you are looking for the latest western novel. There are giant bookshops in the larger cities where you can find all the classics, and a good selection of biographies and history books. I have my favourite reading – often going through my tatty copies of Chandler or Wodehouse. My students were a little disappointed when I read them some Sherlock Homes; they were expecting Mr Benedict Cumberbatch and his chums – he is hot stuff here with the girls; they tell me it’s to do with his nose. Long noses are seen as beautiful here. 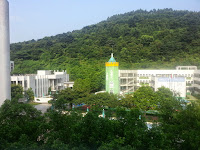 I’m reading Mo Yan’s Red Sorghum at the moment: gruesome but gripping. The Howard Goldblatt translation is excellent. I also keep a copy of selected Chinese poetry in my briefcase; Poetry and Prose of the Han, Wei and Six Dynasties (Panda Books). Sagas are popular, great family tales covering a century or so. Also popular amongst readers of romance is Yan Ge Ling, with stories such as ‘White Snake’, ‘The Thirteen Women of Nanjing’ and ‘The Criminal Ly Yanshu’ becoming hits on the silver screen and the small screen.

I spent ten years writing detective/thrillers, even setting one in Libya and another in China. I had the usual lorry-load of rejections from agents, until a few years ago I had a two-page response from a reputable agent who had read my work carefully. His remarks were encouraging and honest, telling me the writing style was good, the stories good, but nobody will buy them: they won’t sell.
I decided to change tack. Having had a restorative read of Jeeves and Wooster, I wondered; what would have happened to Bertie Wooster if he’d lost his little all, landed on his uppers? And what if Jeeves was more sinister, perhaps even a traitor? The Pelham Hardimann comic adventures began. And, like any writer worth his salt, I decided on a pen-name – an anagram: Robert E. Towsie.

Words of advice for the China-curious? 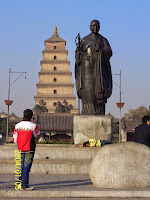 Do not come to China to find yourself. I have met many a lao wai who has come here to do that. Many of them end up spending all their evenings sitting in ‘foreign-style’ bars drinking Budweiser or fake Johnnie Walker, griping about life with other unhappy foreigners. China, as full up of humanity as it is, can be a lonely place if you have nothing else in your life except work. There are a few Writers’ groups, sports teams, and rambling associations you can get involved in. When I am not writing I get on my bike and travel the 50km Greenway, which wiggles its way through the hills around Shenzhen – carless, with small farmsteads scattered about, free-range chickens and little hamlets of beehives where you can get fresh eggs and fresh honey.

You need something to do outside of work. You also meet a better class of person in these little hamlets – people untainted by the ‘screw the tourist’ mentality. And you don’t need the language, as long as you learn hello, please, thank-you, and smile a lot. And, of course, as with anywhere in the world, farmers cook the best dishes. We often stop up in the hillsides for a whole duck or chicken, with whatever vegetables are available that day, and a couple of Tsingtao. In these places, people sit in circles, eat, chat, argue and fall about laughing, unlike the townies who sit around tables in groups while ignoring each other – eyes and fingers glued to their mobile phones. Yes, the Chinese are like everyone else in the world – those who are not with them are more important than those who are.

Carl Plummer writes World War II adventure spoofs under the pen name of Robert E. Towsie. Born in Hull, England, he lived in Cyprus, Paris and Libya before moving to his current home of Shenzen, where he works as a university lecturer.

All images courtesy of Carl Plummer unless otherwise captioned.