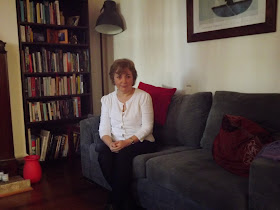 Chris Curran's first novel, Mindsight, is a psychological thriller. It was chosen as the lead title for Harper Collins' new digital first imprint at Killer Reads. She lives in Hastings on the south coast of England and Mindsight is set in the town.

Tell us a little about you and your writing.

The moment when, as a four year-old, I first understood that those squiggles on the page were words is still vivid in my memory. It really was an awakening and I've loved books ever since. My first job was in the local library and I still feel most at home in bookshops or libraries.

I began to have ambitions to write when I realised that most storybook heroes were male, and females were either too goody-goody to be true or totally pathetic. So I try to feature brave and interesting woman characters - and they don't have to be good.

You're a new name in published crime fiction, why write crime?

As I'm an omnivorous reader the choice wasn't obvious. However, there's something supremely satisfying for me about a good crime novel. I think it's the combination of a strong story, along with sharp psychological insights, and the appeal to the fundamental instinct we all have for righting wrongs.

If you had to swap to a different genre, what would it be and why?

I would love to try by hand at SFF, or a fantasy novel for children or young adults. Again, it's all about the story and I am in awe of the soaring imaginations of people like Ursula Le Guin and Philip Pullman who can create whole new worlds.

What's the best thing about being a writer?

Reading a scene you've written and knowing it works.

Marketing. I love meeting readers, but would prefer to avoid the rest.

Where do you write?

In the corner of our dining room near a window. I stand up to write, with my laptop on a bookshelf just above waist height. Apparently Charles Dickens and Ernest Hemingway also wrote standing. I don't know what their reasons were, but it allows me to pace as I think and to work out the action scenes by performing all the parts.

What would be your top 3 writing tips to up-and-coming authors?


Which 3 books would you take to a desert island?


Which crime author do you most admire?

There are so many, but as Ruth Rendell has just died I have to pick her. In the form of her alter-ego, Barbara Vine, she has been credited with inventing the dark psychological suspense novel and it was Vine's books that make me want to write something as atmospheric and intense.

What are your future writing plans?

I have two novels at different stages of development; both standalone psychological thrillers. The first is about a woman who sister was murdered as a teenager fifteen years before, and their father convicted of the crime. The second is partly set in the 1950's, in the dying days of variety theatre, and also in the very different atmosphere of the Swinging 60's.