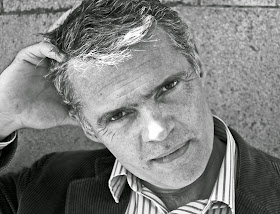 Peter Jukes is a British author, screenwriter, playwright, literary critic and blogger. He has written for both The Independent and the New Statesman on themes as diverse as nationalism, art in the computer age, and apocalyptic religion. Jukes is also a regular drama writer for TV and radio, having started award-winning shows like Waking the Dead and the acclaimed Lenny Henry drama Bad Faith.

For his live Twitter coverage of the phone hacking trial in London, Peter was named the best reporter on social media by the Press Club, and his blog nominated one of the three best news websites by the Press Club this year.

New Book: Beyond Contempt: The Inside Story of the Phone Hacking Trial
Press Gazette's UK Reporter of the Year on Social Media

Somewhere in the spaces in between, probably with a guitar in my hand. I think we’re all probably more eclectic than modern professions allow us to be, but my fiction has always been driven by research, and my drama background certainly helped with the theatrics of the Old Bailey


Why did you decide to devote seven months of your life to live-tweet the phone hacking trial?

As my haphazard career amply shows, I’m more of an improviser and adventurer than long term planner, and the hacking trial coverage was completely unexpected. I’d originally planned only to cover the opening the of the trial, and had no idea that the whole thing could be live tweeted, or that my coverage would attract so many followers wishing to fund me for the duration

You’ve written about the Murdoch empire before – is the chief reason that it’s a fascinating story?

I’ve spent my whole adult life with Murdoch as a major figure, and his impact on Britain combines my interest in culture, politics and business. He’s an iconic if polarising figure, and his successes and failures tell us so much about the modern world – from the Freudian dynamics of rich dynasties, to the future of newspapers and digital media.

Conventional reportage versus new media. What are the pros and cons?

New media tends to be more narrowcast, and focused on a group of aficianados who want all the gory detail. It requires the audience to tune in and out, and forces them to make me editorial decisions. It’s more interactive and direct, especially for British courts which don’t allow cameras. But the downside is apparent in my book about the hacking trial, Beyond Contempt. Rarely did a day go by without one of the defence barristers making some point about ‘prejudicial tweets’. In real time, with so many reporting restrictions, it’s hard to avoid pitfalls. And the level of vitriol and prejudice on Twitter would never pass muster in a printed newspaper.

How were you viewed by broadcast and press journalists covering the trial?

At first I think I was treated with a mixture of pity and bewilderment. Why would anyone want to tweet out such a long and controversial trial? Most the reporters were, however, extremely helpful and supportive, pointing out potential dangers, and retweeting me a lot. I have some residual guilt that – because many news agencies were following me – I might have put some other court reporters temporarily out of a job.

My own gripe with the way the trial was covered would be about the verdicts. The three major newspaper groups immediately went for the same line – £100 million wasted on one guilty verdict – overlooking the fact there were actually 6 convictions for phone hacking, and vast bulk of that cost was the corporate defence. I don’t blame the reporters at the trial though for this spin, but editorial agenda of their editors and a defensive mind-set in much of Fleet Street.

Tell us why you opted to crowd-fund the live tweets.

Because I couldn’t afford to stay the duration. I was broke. People offered to pay. It was completely improvised and accidental. There was a demand. I had the ability to meet it. Though I think my followers might have been a bit paranoid in this regard, many truly believed that only an independent blogger could cover a big media trial because – from the BBC to News UK – most news organisations could be seen to have a vested interest in the result.

Can you give an example of the kind of thing you were not allowed to report at the time?

My book covers much of the legal argument, fascinating and often extremely contentious which could only be reported after the trial – this ranged from sudden discoveries of thousands of emails, to how much of the Brooks’ love letter to Coulson we could report, to constant complaints about prejudice in the rest of the press. With many trials still pending, there are a dozen or so names we still have to redact when writing about the hacking trial. It’s a minefield, and one false step can blow up a trial

As Nick Davies says, there’s never been a trial like it. Newspapers, celebrities, politicians and politics, tragedy and farce. Were there any laughs?

It wasn’t just Nick who said this – everyone, particularly the lawyers, knew this was a trial of century in terms of cost, number of high profile defendants, and length – it was officially the longest concluded trial in British criminal history. But fortunately, there were a lot of laughs. The judge, Mr Justice Saunders, has a keen wit. Sienna Miller and Rebekah Brooks had us rolling in the line – especially a Brooks comment about Tony Blair (more in my book – a whole chapter of which is called Commedia dell’Arte). And ranging from lesbian soft porn to Pizza deliveries, Charlie Brooks’ appearance was a comic masterpiece.

Do you feel justice has been done?

How long have you got? I feel that, in terms of the evidence the jury, they could not be sure Rebekah Brooks knew about phone hacking. Another jury might have gone another way, but the corporate defences were brilliantly mounted, and the burden proof for a criminal trial is very high. That said, I never particularly wanted people to go to prison – I wanted the truth to come out – and on that standard, the trial has seen transparency and accountability. Daylight is the great cleanser, and the mere fact the trial went ahead should prevent excessive privacy intrusions in the future. I also hold the higher ups more accountable than the foot soldiers for the toxic culture that developed among sections of Fleet Street. With the CPS still considering corporate charges, this might be the most effective way of ensuring these practices never become endemic again.

Where do you stand on the various options for press regulation?

My main feeling has always been that most the problems stem from concentration of ownership in the British press and media, and that where monopoly power accumulates, abuses will always follow. The fact that Rebekah Brooks was close personal friends with three successive prime ministers is just one example of the problem.

Despite its famed first amendment, the US actually has much more stringent laws governing press and media ownership: that’s the reason Murdoch is a US citizen (he had to be to buy the Fox network) and wasn’t allowed both newspapers and TV stations in the same city. But until we have better trust busting laws, I think some kind of quick and cheap system of arbitration and redress needs to be instituted to protect the public from the more feral side of the press (the rich can always sue) ISPO promises this – but is still heavily indebted to the three main newspaper proprietors. 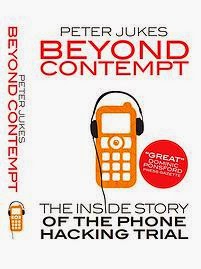 Beyond Contempt is out now. What can we expect?

Thrills, scoops, all the humour, legal manoeuvres, court gossip – dodgy hearts, burst appendices; me getting harried by Louise Mensch and Guido Fawkes, attempts to investigate my finances by the Daily Mail: and of course a running commentary (verboten during the trial) of how different lawyers, defendants, and witnesses fared under pressure.

What are you working on next?

I’ve been out to Ukraine to cover the role of social media both in the Euromaidan uprising and then in the war in the Donbas region. There’s also the up and coming panel in the murder of private detective Daniel Morgan in 1987: this is the deadly heart of the phone hacking scandal, and the corrupt collusion between police and press, the cradle where the ‘dark arts’ were born.

Who should play you in the film?

Neil Pearson from Between the Lines, Drop the Dead Donkey, and Waterloo Road has just recorded a play about my coverage of the trial, and played me (an odd experience). It will be broadcast on October 10th on BBC Radio Four. I hear George Clooney is unavailable because he’s directing the film of Nick’s book Hack Attack. So, given the more comic mishaps during the trial, perhaps Rowan Atkinson.