I kept this one fairly quiet, because up until a couple of months ago, I didn’t know if we would manage to pull it off. But on 1st June 2013, in association with Triskele Books, An Earthless Melting Pot – a collection of prize-winning short stories from the 2012 Words with JAM Short Story Competition was launched.

Yes, we had a launch party, a real life one, containing lots of fizz and food! 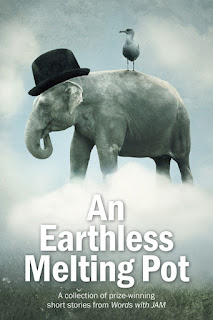 We kicked off the evening with primarily the fizz and plenty of chatter. I’d say we had a record-breaking 15 out of 24 contributors in attendance, but as we’ve not had launch party before, let’s just say I was astounded as such a huge turnout.

Ruby Cowling, winner of the 2,500 word category, was first up and read her touchingly beautiful Abhra, The Cloud. (A brief phone call between Ruby and me the day before confirmed that perhaps the pronunciation wasn’t exactly right, but ensured that we both pronounced it the same way.)

Second up, Ken Elkes read Busy Lizzy, winner of the 250 word or under category. The contributors weren't the only anthology related people present; Zoe Fairbairns was bursting with excitement at getting the chance to speak to the authors whose stories she had judged earlier this year.

My fellow Triskele authors chose to talk about their books in a series of brief interviews with Liza Perrat, whose book Spirit of Lost Angels was published in the first wave of Triskele releases. Gillian Hamer explained her fascination for Anglesey and why her third book, Complicit, is set on the wild North Wales coast. Jill Marsh talked about Tread Softly, her crime novel set in the Basque Country, and her research into Spanish wines. Catriona Troth discussed her novella Gift of the Raven, and how she identified with the main character's quest for his heritage. And I took to the stage once more to talk a little about my own novel, Tristan and Iseult, but this time I got a seat and also managed a laugh from the audience in appropriate places. 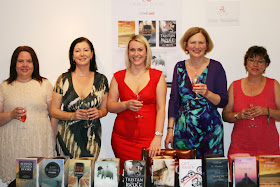 Also in attendance and supporting the independent route, Polly Courtney, who famously dropped her publishers, Harper Collins, after their marketing her as chicklit, and became a self-publisher. Indie authors were well represented by members of The Alliance of Independent Authors, such as Helena Halme and Lorna Fergusson.

But as our own JJ Marsh says, there is no Them and Us. Traditionally published authors also turned up in support and to join the fun, including Guy Saville, (a previous WWJ cover author) and Annemarie Neary.

I’d like to thank everyone who joined us on Saturday, it was lovely to meet each and everyone one of you. This launch party could not have taken place without the combined efforts and funding of Words with JAM and Triskele Books – collaboration has never been more important than it is for the publishing industry today, and at 6pm, Foyles, London, England, I think we demonstrated in style what can be achieved.

An Earthless Melting Pot is available in both paperback and ebook format from our online store, Amazon.com and Amazon.co.uk.

JD Smith – Editor, Words with JAM
Jane lives and works in the English Lake District. Having worked as a graphic designer since leaving school, her passion for books and everything literary took over and she now works predominantly on book cover design and typesetting. She is also part of the Triskele Books group, and is the author of Tristan and Iseult. 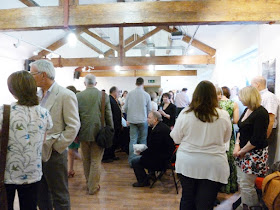 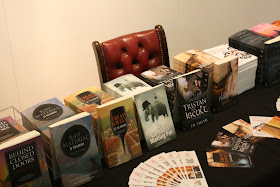 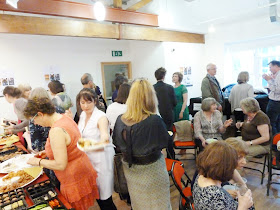