The basic components of writing fiction: Beginnings by Sarah Bower

So, let’s begin with a few ideas about where ideas come from and how to get started moulding them into story shape. The first tool every writer needs is:

The Notebook: All writers need a notebook. It might be a beautiful Moleskine or the back of a bus ticket, a smartphone or an ipad, or even in your head if you have very good recall. Whatever suits you, learn to make a space in your life for story ideas. Get into the habit of noticing off-beat news stories, jotting down overheard conversations or odd things you see in the street. Often it’s not just a single thing but the juxtaposition of words, events and images so listing them all in the same place can be a creative act in itself. Inspiration for fiction is all around, but the writer has to train her imagination to be aware of it, and the notebook is your first step.

Next you need: A Daily Writing Regime: Writing is a discipline like any other. The writing muscle needs regular exercise. Write every day, preferably at the same time and in an environment specially created for it (even if this only means clearing a space on the kitchen table for the laptop or always using the same pen), even if it’s only for 15 minutes and what you come out with appears to make no sense at all. Plough on however difficult and mundane it seems – just because writing is classified as an art form, don’t kid yourself that you can sit around waiting for inspiration. The Muse helps those who help themselves!

Exercises can be really helpful in getting started, whether you’ve never written before or are coming back to it after a break. Here are a couple of suggestions:-

Set your alarm fifteen minutes’ earlier than usual. As soon as you get out of bed in the morning, sit down in your writing space and write for ten minutes. Don’t pause before you begin or stop to think while you’re writing, just let the words flow on to the page. You need have no regard for spelling, punctuation or any of the other constraints which we can sometimes find inhibiting. Remind yourself this work is private – no-one is going to see it but you.

This is brilliant for freeing up creativity and reassuring yourself that you can get words down on paper. Even many experienced writers do this exercise regularly because it can, in itself, be a source of inspiration, helping to unearth ideas which have been buried deep and blocked from coming to the surface by the preoccupations of everyday life, whether that be other work or family commitments.

ONCE UPON A TIME

Sit in a cafe, or at a window overlooking your street or garden, anywhere where there is something to watch. Note down everything you experience – using all the senses, not just sight. What do you hear, smell, taste, touch? Once you’re satisfied you’ve recorded everything your senses are telling you, go back to the beginning of your passage of writing and add the line, ‘Once upon a time...’

You have begun a story. This opening line will work its magic on the jumble of impressions you’ve written down. It will start to impose order. Once upon a time, something happened, then something else happened. Your opening line forces you to begin sorting your observations into some sort of order.

Next time, we’ll look at the difference between plot and story and consider more closely how we order a narrative and what effect our decisions have on it.


Sarah Bower is a prize-winning novelist and short story writer. She is a regular contributor to the Historical Novels Review and Ink, Sweat and Tears as well as Words With Jam. She works as a mentor to other writers, and teaches creative writing at the University of East Anglia, the Open University and the Unthank School of Writing. She holds an MA in creative writing from the University of East Anglia where she is now based in her role as co-ordinator of the mentorship scheme for literary translators run by the British Centre for Literary Translation.

Sarah is the author of THE NEEDLE IN THE BLOOD and SINS OF THE HOUSE OF BORGIA (originally published in the UK as THE BOOK OF LOVE) and is currently working on the second of two contemporary psychological mysteries. Her work has been published in eight countries.

Everyone remembers what they were doing when the news broke: when Kennedy was shot, when Princess Diana died, when the first plane crashed into the World Trade Centre. Yet everyday lives continued with their own ups and downs. The Bridge House anthology On This Day brings us a collection of short stories about those everyday lives and how they are gently connected with a world-shattering event.

Imagine is one of these stories. It follows young Cleopatra Smith as she navigates school friendships, the demise of a terminally ill aunt and the death of John Lennon.

Libby O'Loghlin is an Australian who lives in Switzerland. A writer and editor by trade, she has taught scriptwriting at university level and writes regular reviews for UK gaming site, GamePeople. She is co-founder of the Nuance Words collective and co-curator of The Woolf literary e-zine. 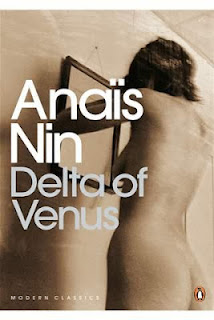 When the Ed suggested I write a blog post recommending erotica, I immediately turned to one of my favourite eroticists for help – Barbie Scott.

‘I can’t do this on my own, I bleated, I’ve not read much at all.’ Then I made a list and realised I’d read more than I thought. Here’s a random selection with comments from Barbie and me.

Fanny Hill: The Memoirs of a Woman of Pleasure – John Cleland

JJ: I thought this was so saucy on first read. Fanny, the accidental prostitute, upended through luck and lust ends up well and truly satisfied.

JJ: A revelation. This book was a shock and a delight. Whilst describing all kinds of kink, the perspective is both feminine and literary. I read this as a teenager and some of Nin’s stories still sit in my subconscious.

BS: These stories are fascinating to me because some of them are delightfully transgressive. Nin sometimes touches on aspects of sexuality which are very much proscribed nowadays, yet does so with delicacy and humour.

JJ: And so intelligent in terms of her recognition of the differences between male/female arousal, don’t you think?

BS: Yes, and seeing the difference between erotica and pornography in terms of the way it’s written – erotica being generally more poetic and elegant. A lesson for me there, I think!

JJ: I still have a soft spot for this one. Mainly because I was so wide-eyed when I first read it. It’s so energetically lusty and as much story as sex. The word ‘romp’ was invented for just such a book. It’s absolutely a male fantasy, but openly so.

JJ: Yes, you’re right. Lots of so-called erotica, regardless of origin, has that Carry-On, saucy postcard, slap-and-tickle tone. But some of it has moved on.

BS: I’m remembering all those seventies’ films that treated sex as a joke – Confessions of a Window Cleaner and such like. Perhaps we’re more sophisticated now.

BS: Haven’t read this one – and your comment doesn’t inspire me to!

The Story of O – Pauline Reage

JJ: I read this in university, probably the first time I consciously became aware of the politics of sex. I am still awed by the brilliance of that title. Then I re-read it while directing a production of Spring Awakening. It’s not for the faint-hearted. But as for something that pushes boundaries ... I’m glad I read it.

BS: I’m in two minds about this one – it’s arousing, certainly but I also found it quite an uncomfortable read. We never seem to learn whether O gets any pleasure from the experience herself – she’s only willing to have these things done to her because it’s what her lover wants.

JJ: Well put. This is exactly why I have problems with de Sade, Saló and to an extent, Anastasia Steele.

BS: I’ve been dipping into de Sade (for research purposes, of course) and some of it is so extreme it becomes laughable. ‘O’ isn’t risible in that way, nor is it as extreme, but is more disturbing, in my view, because of that.

JJ: Oh, I enjoyed this one. Steamy and intense. I still remember a couple of scenes from that book which can still raise my temperature. She conveys exactly what extreme lust does to the mind.

BS: This one was an eye-opener for me – sensual rather than sexual really, and touching on the same deep fantasies as The Story of O but in this one we know the participants have given their consent and that they get something from the experience personally. Probably my favourite.

BS: I haven’t actually read this one but I did see the TV series and I have to confess women dressing as men in that effeminate guy sort of way certainly does it for me. I’ve just read the free chapter on Amazon and love the way the book opens with a description of Whitstable oysters and music hall. This one looks like great fun so it will be added to my ‘to be read’ list immediately.

JJ: And then get yourself a copy of Fingersmith. I wouldn’t describe it as erotica, but it’s hugely sensual and so beautifully written.

JJ: A collection and commentary by India Knight, who reminds us of the saucy bits we loved as schoolgirls. It’s light-hearted and giggly, and more memorabilia than erotica.

BS: Haven’t read this one either but the chances are I’ll have read many of the dirty bits mentioned.

JJ: Have you got, if I may coin such a phrase, a favourite dirty bit? From your own work or others’?

BS: Oh, that’s a hard one. Oh sorry, pun not intended. A difficult one! I can’t think of a specific favourite phrase but the anticipatory moments – the moments before things start to happen – in Exit to Eden do it for me every time. I think as far as my own erotica is concerned, I need to infuse it with more sexual tension, as that’s what turns me on.

JJ: Which is why many women are still panting over Mr Darcy. For me, I think Anaïs Nin. She sums it up in this line – How much do you lose by this periscope at the tip of your sex, when you could enjoy a harem of distinct and never-repeated wonders?